I especially enjoyed Professor Stauffer’s article and there some interesting points and intersections I’d like to mention in relation to it. I don’t own many old books but a few years back I purchased this book: 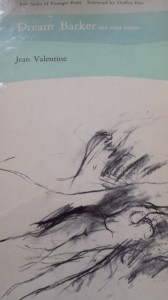 It’s a first edition of Dream Barker by Jean Valentine, published by Yale University Press, 1965. Jean won the prestigious yale younger poets award for her first collection, which was selected by Dudley Fitts, a then poet and translator of Greek. (For those who are unfamiliar with her work, Jean is still writing. Her 2010 collection Break the Glass was nominated for the Pulitzer prize and she was the New York State poet laureate from 2008-2010.) On the inside flap there are two hand-written texts, one from Jean and one presumably from whomever sold it to the Strand’s rare book collection where I purchased it: 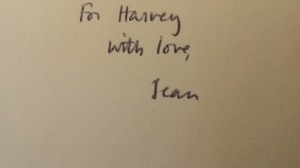 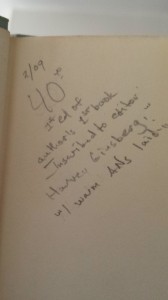 I went to a reading and a book signing for Jean’s 2010 Break the Glass and I presented this book to her. Turns out Harvey, who was indeed her editor back then, had passed away some years ago and whomever had this book had passed it along, either to the Strand or to a third party. Jean was nice enough to sign the book again for me on another page: 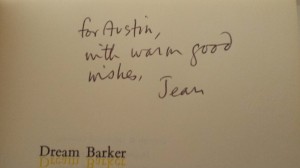 This whole thing was interesting to me. This person whom Jean Valentine had never met (me) now had this personal record of her past. At the same time, this object from the past had now been appropriated to the present via Jean’s inscription to me on the proceeding title page.

When I purchased this book, I did so despite already owning the same text in another form. I wanted to own an original print edition, and I love how 1960s it is. The aesthetic design of the whole book is unmistakably marked by the decade and region from whence it came. These aspects are inseparable from the text itself.